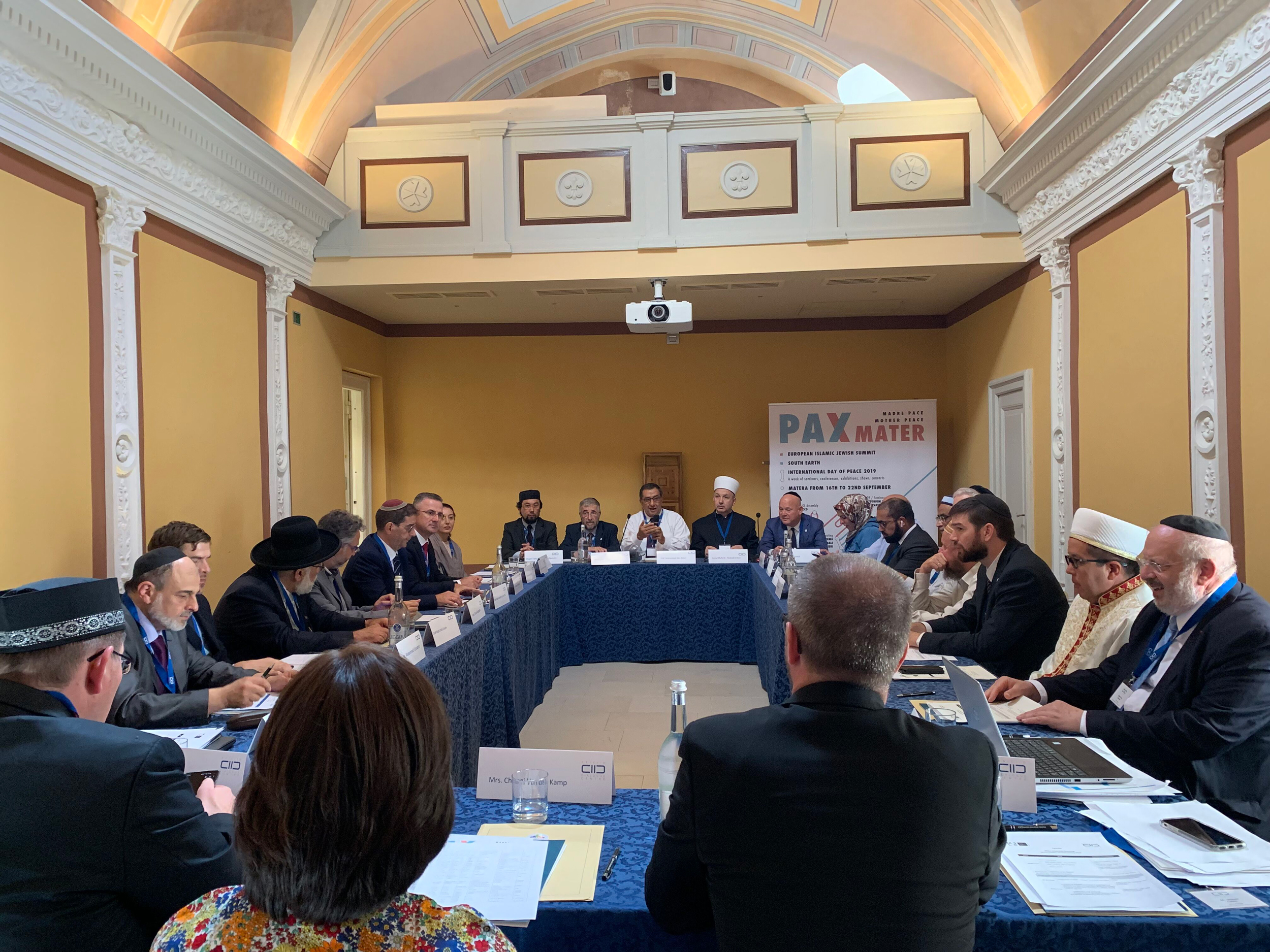 The statement, signed by 29 religious leaders from 19 European countries, was one of the outcomes of the Muslim-Jewish Leadership Council’s General Assembly in Matera, Italy, which took place on 16 September and was co-organised by KAICIID and the City of Peace for Children Foundation.

On behalf of their religious communities, the signatories praised the European
commitment to safeguard diversity but urged institutions and authorities to be vigilant and to “take steps to stop divisive and discriminatory discourse and hate speech, including Islamophobia and Antisemitism, designed to isolate our
communities, make them appear foreign to Europe and its values or to set our
communities against one another for political gain.”

Based on the principles of European law, they called for equal treatment of all
citizens, including Jewish and Muslim minority faith groups. MJLC members
expressed deep concern at an “increasingly polarized political discourse and spread of misinformation in Europe which is endangering fundamental rights, provoking mistrust, and encouraging rising levels of Anti-Semitism and Islamophobia with attendant hatred and discrimination on a political, social, legal and personal level.”

The statement mentioned in particular the need to protect religious freedom by “refraining from setting limitations upon, or seeking to determine the practice of Muslim and Jewish faith through limitations to choice of clothing, preparation of food and the raising of children”.

To avoid misrepresentations or misinterpretations of their faiths and to counteract discriminatory policies, MJLC members agreed to create two commissions that will work on issues of shared interest currently under scrutiny in different countries: one being kosher and halal food and the other, the wider practice of religious freedom. Commission members with technical expertise in each field will offer advice, gather data and provide communication material wherever challenges arise.

“We need to reduce prejudice by framing our perspective in the terms used by
European institutions” Imam Yahya Pallavicini, President of Comunita Religiosa Islamica Italiana and Vice Chair of the Council explained. “On the other hand, these institutions should not compromise our identities by prescribing how faith is to be expressed if this can be regulated internally,” he added.

The MJLC will also produce background documents on the links between Muslim and Jewish faiths on matters of common concern which should provide the basis for joint advocacy. “When we demonstrate that Muslims and Jews are cooperating deeply and systematically, and that we are and will continue to be Europeans, government institutions are far more willing to listen to us” noted Rabbi Fiszon, Chief Rabbi of Metz and Moselle, and Advisor to the Chief Rabbi of France.

The MJLC assembly took place in the context of the Pax Matera celebrations,
organised during the lead up to United Nations International Peace Day and
highlighting the city’s status as a European Capital of Culture 2019. Following a meeting of an MJLC/KAICIID delegation with the Mayor of Matera, Mr. Rafaello de Ruggieri and the Catholic Archbishop of Matera-Irsina, the Most Reverend Antonio Giuseppe Caiazzo, the city announced it will be receiving European Jewish and Muslim religious leaders every year from now on, as a sign of solidarity and a commitment to peace. 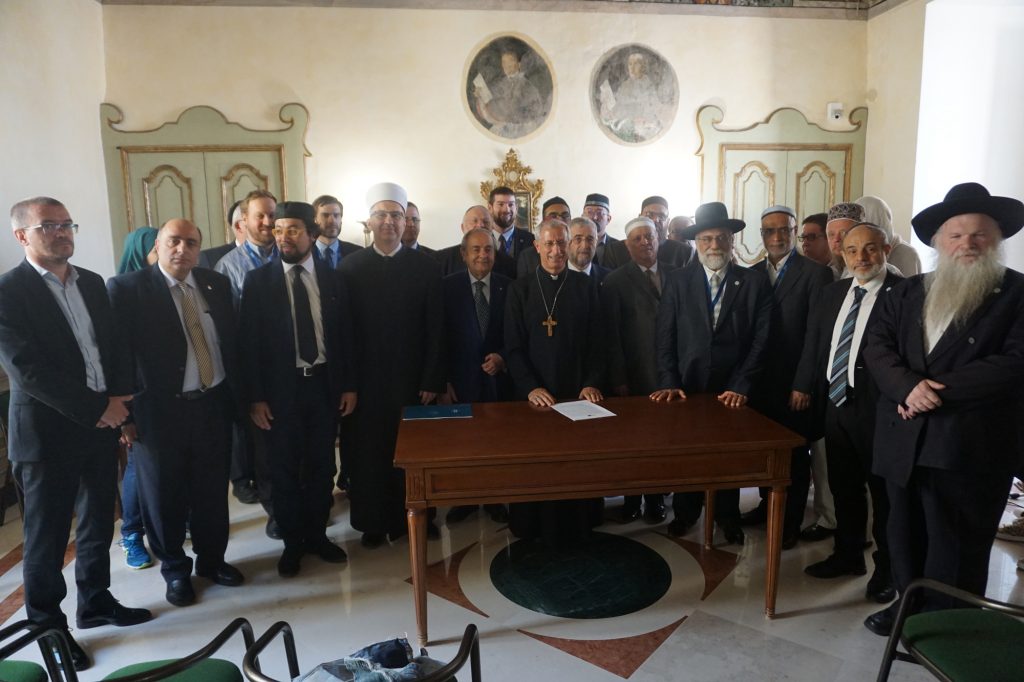 We, twenty-nine leaders of Muslim and Jewish religious communities from nineteen European countries, commend the efforts of people in every walk of life to establish and maintain deep and lasting peace in Europe, and call upon religious leaders, policy makers and European institutions to place freedom, justice, respect and plurality at the heart of their vision for a stable and cohesive European society.

Gathering regularly as Muslim and Jewish religious leaders, the Vienna-based
Muslim Jewish Leadership Council- Europe (MJLC) recognizes that though our
traditions have many important differences, we also have much in common- including the duty to respect those different to ourselves- and can beneficially build up relations of trust and support through interreligious dialogue;

Determined to ensure that our faiths are not misinterpreted or misrepresented, either to drive our faiths apart, or to cause hostility between the religious communities and secular society;

Celebrating the diversity which the governments and constitutions of the European Union uphold as a prerequisite for peace and solidarity, and reiterating commitment to the defense of human rights and equal citizenship so precious to minorities such as the Muslim and Jewish faith groups;

Recognizing, on the occasion of United Nations International Peace Day, the Pax Matera celebrations organized by our host Fondazione Città della Pace peri i Bambini Basilicata with support of the International Dialogue Centre (KAICIID), and the commemoration of the courageous uprising of citizens in Matera seeking to throw off Nazi oppression in September 1943, that peace is more than an absence of open conflict, but must be founded upon freedom, human dignity and justice, with inclusion even of the most vulnerable;

Deeply concerned at an increasingly polarized political discourse and spread of misinformation in Europe which is endangering fundamental rights, provoking mistrust, and encouraging rising levels of Anti-Semitism and Islamophobia with attendant hatred and discrimination on a political, social, legal and personal level;

The members of the Council take this opportunity while visiting Matera, Europe’s beautiful Capital of Culture 2019, to call upon European institutions, policy makers, religious leaders from every faith and civil society at large to support our efforts:

For its own part, during the session in Matera, the MJLC has decided to:

The founders of the European Union have always framed the essence of its society on the concept of unity in diversity, recognizing the added values of a plurality of religious and cultural identities. Should this be lost, the root of the European project and society is at risk.
Therefore, we welcome and seek to encourage those who agree that freedom of religion and freedom of expression, among the many others articulated in the Declaration of Human Rights, constitute cornerstones of a dynamic, diverse and culturally-rich society in which peace is not stasis but expressed in the vibrancy of curious, authentic and open-hearted human relationships.